As you know, we do like to give you a great choice. Each month we've published eight titles but as from December we are introducing a ninth title published on the 15th of the month. And to kick start this, we are proud to announce the first series will be BUNDUKI by J.T. Edson with cover artwork from Tony Masero.

To promote the series, until January 14 2016 it can be found at Smashwords with a 40% discount making it just $1.19. When ordering use the coupon quote of TD76A. You can order any format.

For those of you who do not know or even not heard about this new world fantasy series, here's a little background: 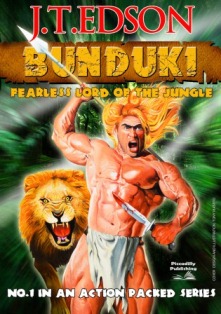 Bunduki was a 1975 novel by J. T. Edson, and the first work in the Bunduki series that followed. Edson explained in his introduction to the Bunduki story in J.T.'s Hundreth that he was a fan of Edgar Rice Burroughs' Tarzan series and created a new Tarzan story. The story was rejected by Edgar Rice Burroughs Inc., as it had been Burrough's wish that no one else write about his famous creation. It was not until Edson read Philip José Farmer's Tarzan Alive (see below) that he saw a way to use his story and created Tarzan's adopted son Bunduki.

James Allenvale 'Bunduki' Gunn was adopted by John Clayton, Lord Greystoke (aka Tarzan) and Jane Porter at the age of two, after his parents were murdered on their plantation by rebels during the Mau Mau Uprising. As James grew up he was trained at the jungle Ambagasali Game Preserve. He was given the nickname Bunduki, the Swhali word for gun. James' birth father was a descendant of Sir Henry Curtis who explored Africa with Allan Quatermain. His mother – Allison Dawn 'Tex' Gunn – was the granddaughter of Texan Mark Counter. James' parents served with Dawn's parents in 'Group Thirteen', a Special Missions Organization of the Secret Intelligence Service during World War II. 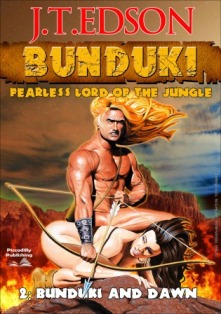 Dawn Drummond-Clayton is the daughter of Sir John Armond Drummond-Clayton (himself the son of Korak and Lady Meriem) and Lady Hazel Drummond-Clayton. Through Korak, Dawn is also the grandniece of Capt. Hugh 'Bulldog' Drummond. Dawn is a graduate of the Roedean School, and an expert in martial arts, wilderness survival, athletics, gymnastics, swimming, and fencing. Like her husband, she is unaging and immune to tropical diseases and parasitic infections, thanks to a treatment received courtesy of her great-grandfather Tarzan. In the 1970s she was transported along with her mate to the planet Zillikian by aliens known as 'Suppliers'. She uses a Ben Pearson Marauder Take-Down hunting bow and a Randall Model 1 fighting knife.

Zillikian is a counter-Earth planet (i.e. located at the L3 Lagrange point which is opposite the Sun in the same orbit as Earth). The planet is very similar to Earth in climate and wildlife, albeit without the industrialization of Humans that Earth has. In the opening to Bundukithe main protagonists are transported from Earth to Zillikian. It is also revealed that the remainder of the Greystoke clan has gone to live in Pellucidar. Bunduki and Dawn are appointed by the God-like Suppliers to act as the judge and jury for all Zillikian without being sanctioned by the tribes on the planet. They battle warring factions of the Quagga tribe bent on conquering all of Zillikian. 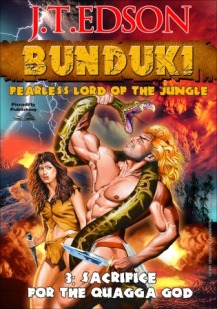 Philip José Farmer In 1972, Philip José Farmer published Tarzan Alive, where he postulated that many pulp and adventure heroes like Tarzan, Doc Savage, Sherlock Holmes, The Scarlet Pimpernel and The Shadow were all part of the same family that Farmer referred to as the Wold Newton Family. This concept of a family of adventurers and an interconnected series of exploits was very influential. In 1975, J.T. Edson built on Farmer's theories for his Bunduki series and expanded his own Hardin Blaze and Fog clan and Counter families with several new series Bunduki, Ole Devil Hardin and Company Z series, increasing the interconnections between all of his series. Edson also began to reference Farmer's genealogical research in his novels. Farmer acknowledged this in one of his novels by referencing one of Edson's characters Dusty Fog and making him a distant relative of the Wold Newton Family. source

Unpublished
Edson had also written a fifth book, The Amazons of Zillikian but due to ongoing issues with ERB Inc. this novel was never published.

Whether it might see the light of day remains to be seen.

You can pre-order the first two titles right now at Amazon and Smashwords.

Posted by Piccadilly Publishing at 02:59

Piccadilly Publishing
United Kingdom
Piccadilly Publishing is the brainchild of longtime Western fans and Amazon Kindle Number One bestselling Western writers Mike Stotter and David Whitehead (a.k.a. Ben Bridges). The company intends to bring back into e-print some of the most popular and best-loved Western and action- adventure series fiction of the last forty years.